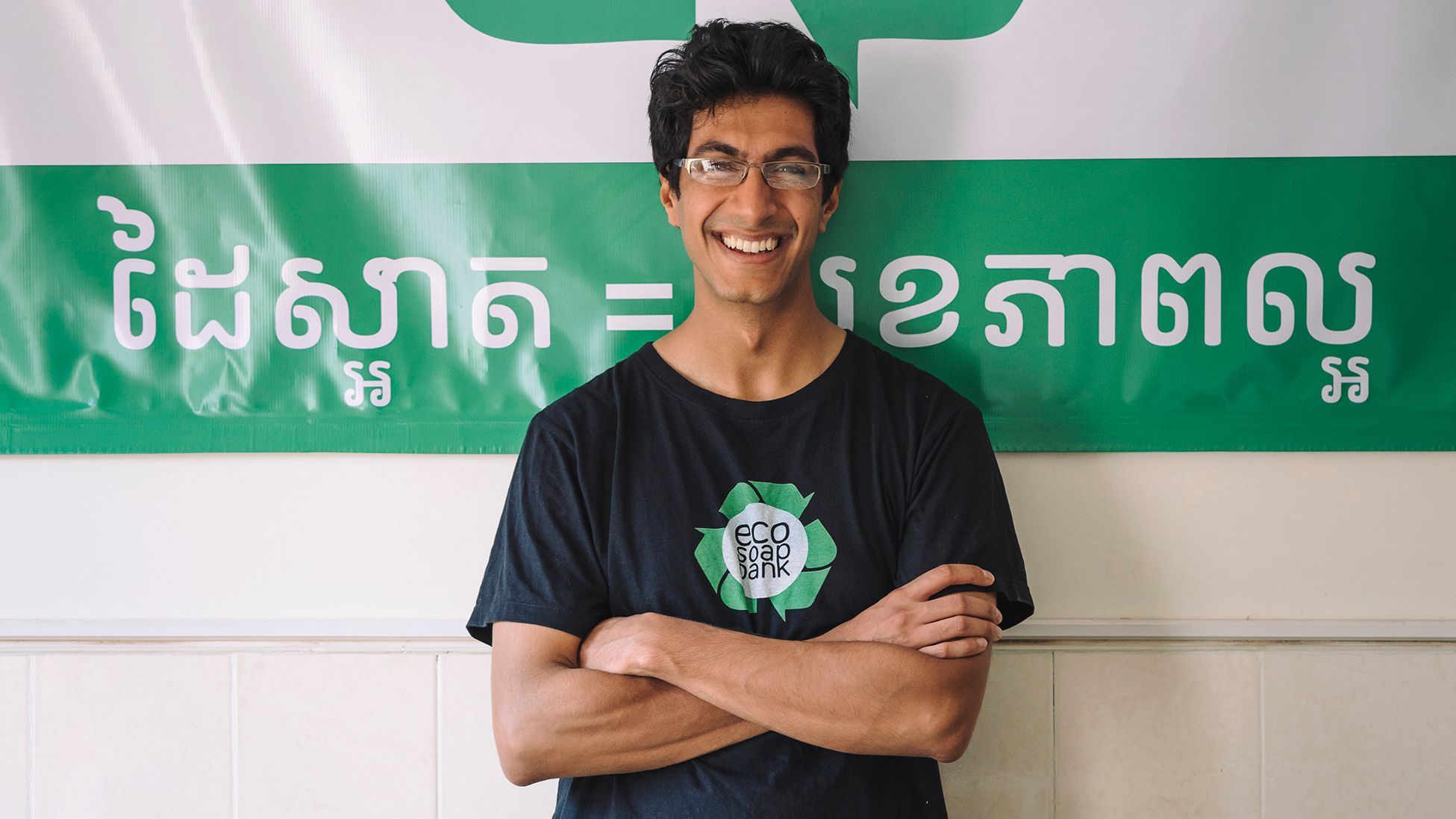 My mum was born in Dar es Salaam, Tanzania and my dad is from Kampala, Uganda. My sister and I grew up in the US, but my parents never forgot where they came from or to tell us that the world is a big place with people who need our help. We travelled extensively, visiting places such as Egypt and the Middle East so that as children we experienced what life was like in the developing as well as the developed world. It became a personal driver for me to return to the developing world to help others.

It wasn’t a surprise to my family that as part of my degree I decided to take an internship in Cambodia. I fell in love with the country. But the hangover of the civil war also permeates every single aspect of daily life. Poverty is extreme, hygiene is poor and if people get sick there’s no health clinic infrastructure to fix it. There are only three hospitals in a country of 15 million people, so that’s 5 million people per hospital.

During a visit to one village, I saw a young mother washing her baby with laundry powder. I saw that and couldn’t think of anything else. She was trying to keep her child safe and well with the only thing she had. She knew if her baby got sick, it wouldn’t stand a chance.

I went back to my hotel room feeling completely down. I wanted to help but didn’t know how to do so in a sustainable way. I stepped into my bathroom and realised the housekeeper had replaced a bar of soap I had barely touched. It hit me like a lightning bolt: I realised I could save hotel soap to save lives.

I was supposed to return to the US in ten days but the next morning I found myself on my bicycle, riding from hotel to hotel in the hot sun, asking their managers to not throw their used soap away, but to save it. They thought I was crazy, but as I explained more, it began to dawn on them that this could be a project worth supporting.

A few days later the idea of Eco-Soap Bank became a reality when we hired Thearang. At 23 she had had little formal education and was so shy when we first interviewed her that she didn’t even meet our gaze. Now she runs an Eco-Soap Bank workshop, managing 13 employees, and she works hard striking partnerships with managers of many of the country’s top 5-star hotels.

Thearang is just one of the 147 women we currently employ in ten countries worldwide. Many of them have been told from an early age that there were no opportunities for them. We reject that idea entirely. We provide free daily education (computer, literacy and numeracy skills) and should they wish, we help them into gainful employment in the hospitality sector through our connections.

In a sense, we operate a work-study programme where women can earn income and get a free education to change the course of their own lives.

Samir and his team collect soaps from more than 1,000 hotels in the developing world. Each soap is sanitised and remoulded into a brand new bar

We’re proud of the soap we produce, and we take the safety of our recycled soap very seriously. Every bar that we collect goes through a three-stage, lab-certified sanitisation and testing process which includes heat, chlorination and filtration.

We use a simple soap press to remould the bars into brand new soap bars. No electricity or fossil fuel is used in any part of the remoulding process.

We charge $0.12 per bar on average – that’s around 40% of the going rate for a market soap. We charge people because we don’t want to cultivate a dependence on handouts, but rather to empower communities to take their health into their own hands through their purchases.

Every bar comes with hygiene education delivered entirely by local women so that users know how to keep themselves healthy for life.

Making the final shortlist of Unilever’s Young Entrepreneur Awards in 2018 provided me with access to thought leaders and experts at Unilever and at the University of Cambridge Institute for Sustainable Leadership (CISL), who genuinely wanted to help grow our impact.

Project Eco-Soap Bank currently employs 147 women in 10 countries. A new Kickstarter campaign which launches on 1 May 2019, aims to fund the development of a luxury soap bar which will add 45 more women to the non-profit’s workforce

Today, we recycle soap from nearly 1,000 hotels in ten countries worldwide and we are just getting started. It’s estimated that 5 million bars of soap are thrown away by the hotel industry daily. I won’t be satisfied until we prevent every single bar of hotel soap (or close to that) in the developing world from being thrown away.

Eco-Soap is a proud not-for-profit organisation, but we also possess elements of a social enterprise. We run a paid hotel recycling service and we’re launching Project EcoSoap – a luxury soap product via Kickstarter on 1 May 2019. For each luxury bar purchased, we’ll donate 100 bars to children and families in need and fund the ongoing employment of 45 more women.

People who run non-profits in developing countries get called out for having a saviour mentality. But I would re-cast it as trying to raise awareness of the urgent need for change, for tackling things that are preventing a country from developing further.

With Eco-Soap Bank I wanted to create something that worked to benefit the environment and people simultaneously and I could see a way to stop the waste created by hotels throwing soap away needlessly – a way that could work towards providing everyone with the chance of good hygiene as their fundamental human right.

Tackling both issues is precisely what Eco-Soap Bank accomplishes and it does this by ensuring that the initiative is run entirely by local leaders and local women who know their communities best.

Death from diarrhoea is still a reality for too many people—but if we put our heads together, we can connect the dots to make sure we put an end to these unnecessary deaths in the future.

We are on the hunt for inspiring young innovators who are tackling a social or environmental problem head on! Enter our Awards by 30 June 2019!